Breastfeeding Self-efficacy of Mothers and the Affecting Factors

Breastfeeding is an important health-promoting behavior, conferring numerous health benefits to both mothers and infants (1). Mother's milk is the most appropriate food for infants. There is no other food to replace it (2). Breastfeeding is the normal way of providing young infants with the nutrients they need for healthy growth and development (3).

Today, many international and national organizations strongly advocate breastfeeding (4). According to the United Nations Children's Fund (UNICEF), breast milk is the baby's "first immunization" and helps to protect against causes of diarrhea, ear and chest infections, and other health problems (5).

Exclusive breastfeeding is recommended up to six (6) months of age, with continued breastfeeding, along with appropriate complementary foods, up to two years of age or beyond (3).

Many programmes have been developed throughout the world to promote breastfeeding initiation and duration (6). Launched by WHO and UNICEF in 1991, the Baby-friendly Hospital Initiative (BFHI) was inspired by the Innocenti Declaration of 1990. The initiative is a global effort to implement practices that protect, promote and support breastfeeding, so as to ensure that all maternity wards become centres for breastfeeding support. To be designated as 'baby-friendly,' it is necessary to refuse free or low-cost breast milk substitutes, feeding bottles or teats, and to have implemented the "10 steps to support successful breastfeeding" (7).

Breastfeeding self-efficacy, in particular, is a potentially modifiable variable that has been shown to predict longer breastfeeding duration and increased exclusivity. Breastfeeding self-efficacy is a concept based on Bandura's (1997) social cognitive theory (9). It is defined as a mother's confidence in her ability to breastfeed her child. 10 Efficacy beliefs are important to address in health promotion research, as people must have motivation and perseverance to maintain a health behavior, beyond simply the knowledge of the health benefits (1, 11).

Maternal breastfeeding self-efficacy is a mother's perceived ability to breastfeed her infant and has been shown to predict breastfeeding duration and exclusivity rates among women in the immediate postpartum period. The Breastfeeding Self-efficacy Scale-Short Form (BSESSF) was developed to measure a mother's confidence in her ability to breastfeed her new infant and has been successfully translated and psychometrically tested among women from diverse cultures (1, 3, 6, 12-14). In the Turkish study, Cronbach's alpha coefficient for internal consistency was 0.86 postnatally (6).

The purpose of this study was to determine the breastfeeding self-efficacy of mothers in the 0-3 month period and the affecting factors.

This descriptive study was approved by the Ethical Board at Sakarya University and the study began after approval was received from related local authorities. The data were collected subsequent to approval of the study by the Ethics Committee. The participating mothers were informed of the purpose of the study and the methods to be used, and signed an informed consent statement. Participation was voluntary and could be terminated at any point in time.

The mothers were asked to answer all the questions honestly, and were reassured about the anonymity and confidentiality of the information.

The study was conducted between January-April 2011. The universe of the study consisted of all the mothers who were living in the center of Sakarya province and had infants ages 0-3 months. The study sample consisted of 152 mothers who agreed to participate.

Participation criteria: mothers who were over 18 years old and had healthy infants between ages 0-3 months, had no communication problems and agreed to participate voluntarily in the study. Mothers with premature babies or multiple babies were excluded from the study. The data were obtained from mothers who came to two family health centers and outpatient clinics of a state hospital.

The BSES-SF is a 14-item instrument developed to measure breastfeeding confidence. All the items are preceded by the statement ''I can always'' and are anchored by a 5-point Likert-type scale, with 1=not at all confident and 5=always confident. All the items are presented positively and the scores are summed up to produce a final score ranging from 14 to 70, with the higher scores indicating better breastfeeding self-efficacy. Turkish validity and reliability of the scale were done by Tokay, Okumu§ and Dennis (2010). In the same study, Cronbach's alpha coefficient for internal consistency was 0.87 antenatally and 0.86 postnatally. The antenatal and postnatal BSES-SF scores were significant predictors of breastfeeding duration and exclusivity at 12 weeks after birth (6). In our sample study, Cronbach's alpha coefficient was 0.87.

The data were evaluated with the SPSS program (version 17), using percentages, averages, the t-test, chi-square and ANOVA. 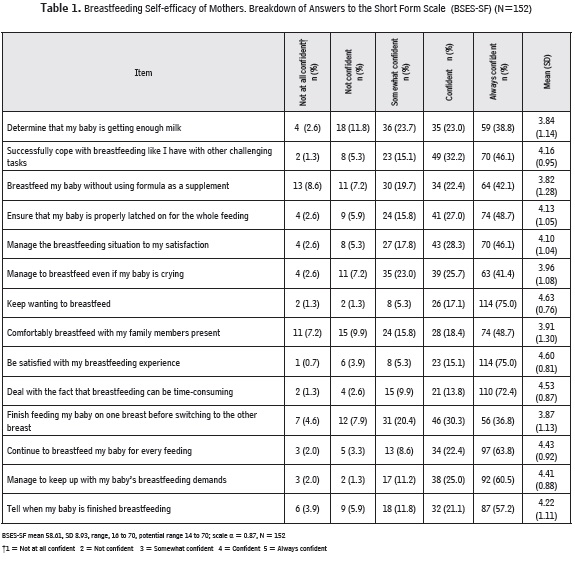 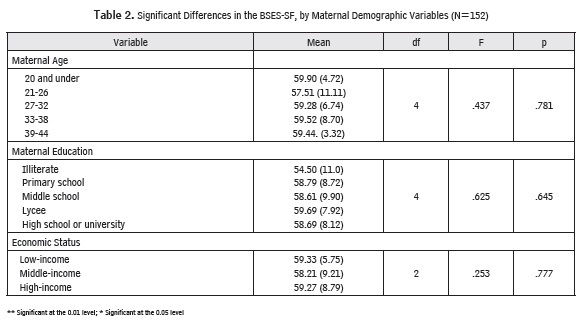 The BSES-SF was developed to measure a mother's confidence in her ability to breastfeed her baby. The Cronbach's alpha coefficient for the sample used in the study was 0.87.

When the BSES-SF score was compared to economic status, there was no significant difference (F = 0.253, p = 0.777). This was similar to other studies (1, 4, 7, 14) in terms of economic status. However, the previous study in Turkey indicated there is a relationship between the scale score and economic status (6).

The Turkish version of the BSES is of diverse utility in clinical practice. Use of this scale gives nurses and midwives an excellent opportunity to increase a mother's breastfeeding self- efficacy.

In addition, any mother who has been identified as having low breastfeeding self-efficacy should have the opportunity to receive additional support.

In this study, breastfeeding self-efficacy was found to be low among mothers who had no prior breastfeeding experience. It is required that health practitioners provide more support to new mothers.

Limitations of the Study

The limitation of this study concerns the fact that its results are based on data from only the Sakarya district. Consequently, it cannot be generalized for Turkey. Similar studies on various populations in Turkey and in other countries should be conducted.

The authors wish to thank the mothers who participated in this study.

The authors declare they have no competing interests.

1. McCarter- Spaulding DE, Dennis CL. Psychometric testing of the breastfeeding self- efficacy scale- short form in a sample of black women in the United States. Research in Nursing & Health 2010; 33: 111-9.