Adoption of the maternal role, according to Ramona Mercer, (1) is "an interactive process of continual evolution whereby the mother senses a bond developing between her and her child, acquires skills to provide the care associated with her role, and experiences pleasure and gratification in that role." Mercer's theory (2) has four phases that occur during the first year of motherhood: a physical recovery phase that goes from birth to the end of the first month, a consecutive phase that goes from the second to the fifth month after birth, a disorganization phase between the sixth and eighth month, and, finally, a reorganization phase that starts in the eighth month and remains ongoing by the time the child is a year old.

According to the results of the series of demographic and health surveys applied in Colombia, the incidence of teen pregnancies in 2010 was 19.5%. This figure is evidence of a severe problem, considering that pregnancies during adolescence and young adulthood (15 to 24 years of age, according to the United Nations) are generally neither planned nor desired, and have a negative impact on the physical and mental state of these young women for their adoption of motherhood. (3)

After the child is born the mother faces a series of tasks when taking care of her child, while experiencing at the same time a range of hormonal and biological changes related to stages of increased psychological vulnerability, coupled with the changes particular to young women's lives. (4)

An impaired maternal role can affect child development, resulting in a higher frequency of abuse, infectious diseases, non-compliance with appropriate immunization schemes, and a decrease in exclusive breastfeeding. These aspects may even influence child mortality during the first year of life. (6)

Studies (7, 8, 9) in psychology and nursing have been conducted to measure parental competency, (10) parental efficacy, (11, 12) and perceptions about motherhood.(13) Moreover, based on standardized language, nursing has proposed diagnoses of the parental role from the standpoint of both risk and well-being, such as Risk of Impaired Parenting (00057), Readiness to Enhance the Parental Role (00164) Conflict with the Parental Role (00064) and Impaired Parenting(00056).

This last diagnosis: Impaired Parenting (00056: NANDA, 2009-2011) (14), approved in 1978 and reviewed most recently in 1998, does not appear in the literature and lacks evidence. Our review of the scientific literature yielded one study conducted in 2005 to determine the factors associated with impaired parenting. (15)

Taking into account that nurses can carry out interventions that favor adoption of the maternal role, a valid instrument is needed for them to establish these diagnoses and to plan and conduct interventions for this vulnerable group, thereby favoring maternal and child health and wellbeing.

The methods currently used to validate nursing diagnoses are based on the four models proposed by Fehring.(16) The one most commonly used is the expert content validation model; the least commonly used is the clinical validation model. However, Fehring's models do not allow for the diagnosis-defining construct to be validated. Validation of a unidimensional construct to obtain a dimensional nursing diagnosis that may easily become a categorical diagnosis is possible only with the methodology proposed by Rasch. (17)

When the items on a questionnaire, in our case diagnosis-defining characteristics, fit the Rasch model, a common interval level measure is obtained for both the items and the individuals. More than 20 papers published in nursing journals between 1985 and 2012 have recommended the use of Rasch analysis to validate different constructs used in nursing. (28)

Taking the foregoing into account, this study focuses on validation of the nursing diagnosis of "Impaired Parenting" using Rasch analysis in primiparous mothers 24 years of age and younger, during the first year of child rearing.

Validate the nursing diagnosis of "Impaired Parenting" using Rasch analysis in primiparous mothers 24 years of age and younger, during the first year of child rearing.

Study Design. A cross-sectional study was conducted. The inclusion criteria were: being a primiparous mother of a term newborn with no health issues, being 24 years of age or younger, and being in the first year of child rearing. The exclusion criteria were: communication impairment, mental abnormalities, and use of psychoactive substances. The study population included primiparous mothers, 24 years of age and younger, who were in their first year of child rearing and resided in the urban area of Bucaramanga (Santander).

Sample: The sample was composed of 301 mothers who met all the inclusion criteria and gave their informed consent.

Instrument: The study employed part of an instrument used previously, where the operational definitions of the diagnosis-defining characteristics were validated by six expert nurses (15). It is composed of 28 dichotomous items representing the 19 parenting-defining characteristics of the nursing diagnosis of "Impaired Parenting" (00056), as defined by NANDA (2009-2011). Three of those items are to be completed based on observations made by the researcher; the others are to be completed based on responses given by the mothers. The primary outcome was the inability of the primary caretaker to create, maintain, or regain an environment that promotes the child's optimum growth and development .The variables (items) were 18 parenting-defining characteristics (Table 1). Additional variables were taken into account, such as the mother's age, the age of the child, and the mother's socioeconomic status and occupation. 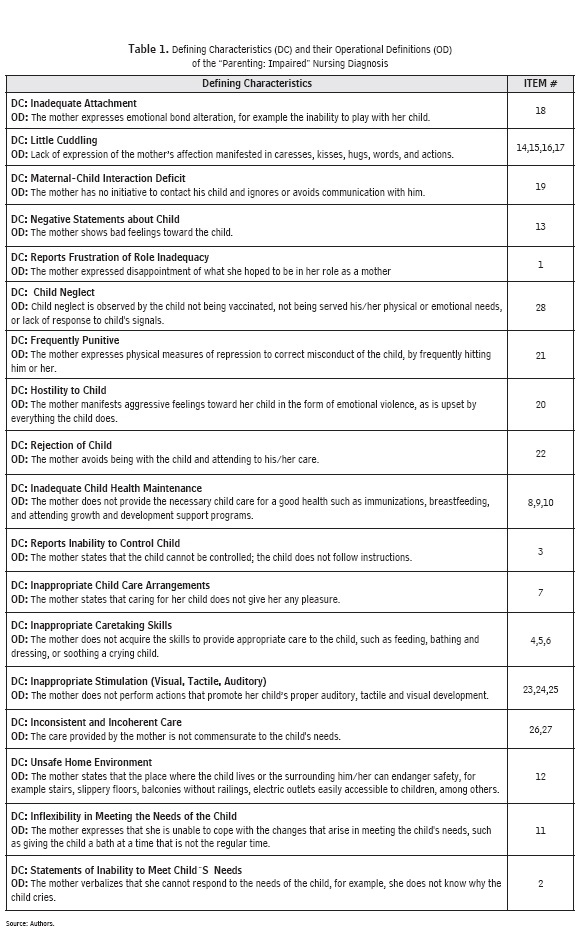 Data Collection Procedure: All the study subjects, who gave their informed consent to participate, were from a third-level hospital. The database was created and doubly digitized into Epi Info 6.04d software to compare the data with the VALIDATE subprogram. The data were reviewed using the STATA v10 program, followed by Rasch analysis using Winsteps (19) for the items used to assess the nursing diagnosis-defining characteristics.

Analysis: Rasch analysis was used. Its basic equation for dichotomous items states that a positive response for an item depends on both the ability of the individual and the difficulty of the item. Its mathematical expression is: ln(P/1-P) = Bn-Di. With certain modifications in the equation, the model can be used with items rated as ordinals, such as Likert scales. The Rasch model is a probabilistic form of the conjoint measurement (20) that turns ordinal observations into interval measures; i.e., logits, which are the natural logarithm of the odds of a positive response. They can be transformed into scales that are easier for the user to comprehend, such as 0 to 100 scales. The model fit employs two statistics: the infit and the outfit, which are expressed both as mean-squares and as Z values. The unidimensionality of the construct is obtained with an analysis of the principal components of the residuals resulting from a comparison between the expected and observed values. The marginal values obtained from the data matrix are used to calculate the difficulty of the items and the ability of the individuals, because these statistics are sufficient for estimating them. Accordingly, the difficulty of the items and the ability of the individuals can being obtained independent of one another and in the same logit scale. Unlike factor analysis and item-response theory, when one uses the Rasch methodology the question is not: What model fits my data? but Does my data fit the Rasch model? (21, 22, 23) Messick's construct validation guidelines, (24) structured into the Rasch methodology by Wolfe Smith, (25) were followed for this study. The aspects mentioned by Messick concerning validity are presented as follows. Substantive Validity: Consistency should be >40% (measures imply categories and categories imply measures).The study subjects' standardized outfit should be within ±3Z. Content Validity: The outfit mean square (MNSQ) of the items should be between 0.5 and 1.5. These are the most productive limits to obtain the measure 25.31; the ideal value is 1. The correlation between items and measures should be >0.3, although for criterion measurements it may be any positive value. (26) Structural Validity: Analysis of the principal components of the residuals is done to establish unidimensionality. These components should not show any specific pattern; the variance explained by the measures preferably should be>50% and the variance explained by the first contrast, <5.0%. In eigen values, the first contrast should be below two, and the loading ideally should be between -0.4 and +0.4. Generalization Validity: The separation (S) between individuals and items should be above 0.7, and the invariance should be demonstrated by the absence of differential functioning of the items (DIF) when their measures are compared between mothers ≤19 years and ≥20 years of age, and the measures of the items between the individuals rated high and low in the original scale and any other variable that is deemed relevant. The value to determine a uniform DIF is a difference of more than 0.5 between the two groups in absolute values and with a p-value <0.05. Multiple comparisons preferably should be made using the Benjamini-Hochberg technique. (27)

Fehring-Rasch Comparison: Assuming perfect reproducibility of the presence of the nursing diagnosis-defining characteristics, their prevalence was used as the Fehring clinical validity index, and a correlation analysis was conducted with Spearman's rho, drawing a histogram with the measures obtained using Rasch analysis for the items.

Ethical Aspects: Colombian Resolution 008430 on healthrelated research and research-related aspects of Law 911 was taken into account. The study was approved by the Ethics Committee and was rated as risk-free research.

Substantive Validity: The consistency of the ratings was high, with the lowest value being 40%. Only 0.9% (3 in 301) of the individuals exhibited a standardized oufit <-3 or >3. Content Validity: Item adjustment (oufit MNSQ) was between 1.32 and 0.57. All the item correlations measured were positive (Table 2). Structural Validity: The analysis of the residuals with principal components showed the measures account for 9.8 eigen values, which represent 27%. The first contrast represents 2.6 eigen values. The load balancing graph failed to exhibit any clustering, and most values are between ± 0.5. Generalization Validity: Separation is 1.30 for individuals and 5.84 for items. The separaion of the individuals would allow for the formation of two strata. The "interaction deficit" item exhibited differential functioning when the sample was divided into two age groups: ≤19 years and ≥20 years. For younger mothers, this item exhibited a -0.75 difficulty, whereas it was 0.74 for mothers age 19 and older, thus resulting in a DIF of -1.49 with p = 0.0007 using Mantel-Hanzel, and p = 0.00003 using Welch's test. Benjamini-Hochberg's critical value was p = 0.00089. This item was removed. The Wright map showed the scale formed by the items is between -2.77 and +3.24 logits. The mothers obtained measures between -3.97 and +0.88; eight mothers with rates -5.26 were removed, as they were believed to pertain to a 2.7% floor phenomenon (Figure 1). 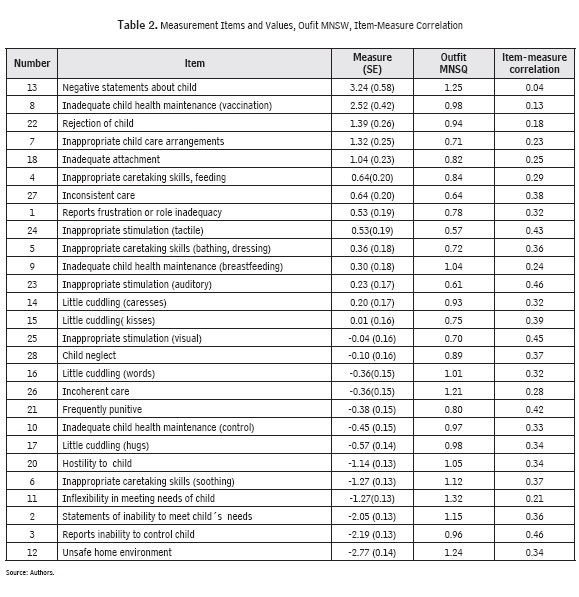 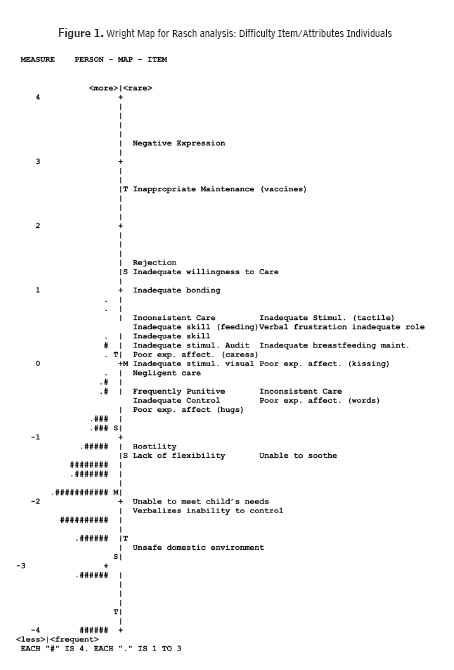 Fehring-Rasch Comparison: Spearman's rho was -1.0, and Figure 2 shows there would be no primary nursing diagnosis-defining characteristics and only three of them would be secondary, should the validation be carried out using Fehring's method.

All of the 18 characteristics studied are parenting-defined. Those pertaining to the infant/child were not taken into account, because most are a consequence of the "Impaired Parenting" nursing diagnosis.

Therefore, having clinically validated diagnoses strengthens scientific evidence for their use. If, moreover, there is a dimensional diagnosis, the study of that particular diagnosis and its associated factors is facilitated.

The results of the aspects mentioned by Messick; namely, substantive, content, structural, and generalization validities, are highly adequate. Notwithstanding the above, the generalization validity of the items needs to be empirically confirmed with mothers 24 years of age and older who are multiparous and from different countries.

There is no explanation for the finding concerning differential functioning with respect to the "Impaired Mother-Child Interaction" item, and no publications were found on this particular subject. The structural aspect showed the measures only account for a 27% variance, somewhat below the recommended figure; however, one has to recognize that there is no consensus on this aspect.

This is the first clinical validation study of the "Impaired Parenting" (00056) nursing diagnosis to establish construct validity measures using Rasch analysis. It demonstrates that 27 items pertaining to 18 parenting-defining characteristics fit the Rasch model and, therefore, are linear unidimensional interval measurements of the nursing diagnosis.

Several other nursing diagnosis validation studies using Rasch analysis have been conducted in Colombia: "Caregiver Role Strain" (00061), (28) "Risk to Other-directed Violence" (00138),(18) and "Anxiety" (00146) (29). As with this study, they yielded results that are contrary to Fehring's analysis.