The most common admission to neonatal intensive care units (NICU) is due to respiratory problems. The causes of respiratory distress are respiratory distress syndrome (RDS), transient tachypnea of the newborn (TTN), meconium aspiration syndrome (MAS) and pulmonary infection (1). The most commonly used treatment for supporting the respiration of a newborn and the first-preferred treatment option at the third level NICU is continuous positive airway pressure (CPAP) administration (2).

CPAP was first defined in the literature by Gregory et al. in 1971 (3) and was used to support respiration in infants diagnosed with RDS (4). In general, several centimeters of water (cmH2O) are applied through the nose to the airways for CPAP (5). This application also is used for preventing atelectasis and conserving the functional residual capacity (FRC) remaining in the alveolar due to positive pressure in the newborn with spontaneous respiration (6).

CPAP through the nose can be applied with single or double prongs, in either short (into the nose) or long (nasopharynx) form and with masks (6,7). CPAP is generated by exhalation against a constant opening pressure; this produces positive endexpiratory pressure (PEEP) (8). The treatment usually starts with 5 cmH2O pressure and can go up to 10 cmH2O pressure, depending on the clinical condition of the infant (7). Among the CPAP methods, the most popular and the most frequently used are bubble CPAP (in B-CPAP, the positive pressure in the circuit is achieved by simply immersing the distal expiratory tubing in a water column to a desired depth rather than using a variable resistor) and ventilatory CPAP (in V-CPAP, a variable resistance in a valve is adjusted to provide resistance to the flow of air) (9).

CPAP develops a synchronisation between thorax and abdominal movement and improves the function of the diaphragm (3), increases the formation of surfactant and FRC, and reduces the need for intubation and surfactant treatment (10). It is also a popular alternative to intubation (11).

CPAP decreases the need for ventilation in infants born between 25 and -28 weeks of pregnancy, and the need to be transferred to hospitals with third level intensive care units for infants born before the 32nd week of pregnancy (3). Early CPAP use also decreases the incidence of bronchopulmonary dysplasia (BPD) and the administration of oxygen at home following discharge (12).

A health staff (a doctor, a nurse) is needed for CPAP administration. The nurse should be informed about the side effects of CPAP (pneumothorax, distension, nasal injuries, etc.), and should be able to diagnose the presenting problem (4). Being an inexpensive and safe application, CPAP can be administered by nurses following short-term training; thus, its effectiveness or failure is related to adequacy of the nurse's care and knowledge (4, 13, and 14). This study was performed starting with the hypothesis that this type of interactive training carried out via a PowerPoint presentation, prepared according to the literature and in light of expert views, would be effective and meet the needs on the issue. We became interested in this subject given the lack of sources in Turkish resources on CPAP and its administration, and the fact that neonatal nurses require education on the subject. This study aims to determine how the training imparted to NICU nurses via an interactive workshop on the care of newborns requiring CPAP affects their level of knowledge. Our hypothesis in this study is that the MCQ score for participating nurses increases after the interactive workshop.

This pre / post- test experimental study was conducted in a city in the Marmara region during April 2014. Approval for the study was obtained from the University Ethical Committee in that city. Required approval for the nurses who would participate in the study was obtained from a university, a state hospital and two private hospitals. Some of the participating nurses had to be on duty while the study was conducted, so it was possible to reach a total of 73.4% (36/49) of the intended population. The sample group was comprised of 36 nurses who volunteered to take part in the study. Information on the participants' identifying features was collected via a questionnaire prepared by the researchers themselves. The evaluation of the data obtained from the participants was done by the researchers using a multiple choice questionnaire (MCQ) prepared in light of the literature. After the MCQ was prepared, it was presented to 14 experts for their opinion; 12 of those experts responded (85.7%). It was sent to seven (7) people in Turkey and five (5) people abroad who were considered to be experts on the subject, and their opinions were obtained. The experts found the MCQ to be appropriate for specific research content. Three expression changes were proposed and all 20 questions were found to be appropriate. Based on their suggestions, the MCQ was given its final form and the number of questions was set at 20 (Attachment A). Every true answer received 1 point, and every false answer was scored as 0. The lowest possible score on the MCQ is 0 and the highest is 20.

The participating nurses attended an interactive lecture-based workshop on CPAP management in newborns. They had accepted an invitation to the presentation prior to the training event. The study was conducted in the conference hall of a university hospital with the participation of 36 nurses who were working in neonatal departments. Their participation in the study was voluntary. A pre-lecture MCQ test was completed by the nurses to test their existing knowledge. The questions in the MCQ were derived from the topic covered in the presentation. Following the lecture, the MCQ test was repeated to assess retention and application of the knowledge derived from the interactive lecture. The participants did not know they would be tested with an MCQ, which would be repeated at end of the workshop. The lecture consisted of a PowerPoint presentation. It was followed by an interactive session of discussions, questions and answers, which continued until it was noted the participants had increased their knowledge.

The data were analyzed with SPSS 16. The Kolmogrov Simirnow test was used to determine if the data show a normal distribution. The Wilcoxon signed rank test was used, since the data did not show a normal distribution. Pre-test and post-test results were found to be statistically significant, according to the Wilcoxon s rank test (Z= -5.239, p=.000).

The Wilcoxon signed test was used because we compared the total score before and after the lecture, rather than each answer in the questionnaire, and the data did not have a normal distribution. The test is two dimensional, which meets the hypothesis that there is a difference (Table 1). 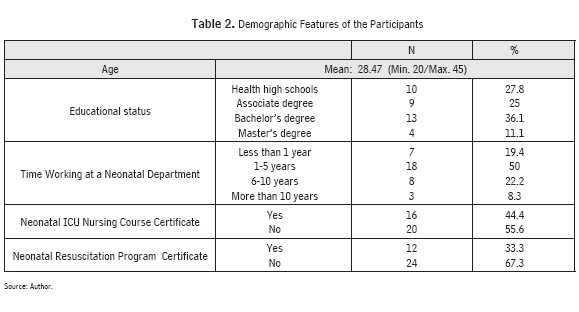 This study was conducted to determine the levels of knowledge nurses have with respect to CPAP and to evaluate the effects of the training imparted on this subject. In general, the nurses were keen on the study since they found it interesting.

The participants in this study were at nurse training grades, had been qualified four years previously, and were actively working at NICUs. Consequently, they would be expected to have a reasonable understanding of CPAP management in newborns.

The pre-test score on the 20 questions prepared through the suggestions of experts in light of the literature was low (Mean: 13.1 SD: 3.022 ), indicating the nurses did not have enough knowledge on the subject. The participants were shown an interactive PowerPoint presentation containing the answers of those questions, and a post-test was applied with the same questions. The post-lecture test score showed a significant increase (Mean: 19.61 SD: 0.838). It is observed that these kinds of studies aimed at the nurse's skills and knowledge aid improvement through appropriate practice (15,16,17).

It is inevitable to have regular updates for nurses who perform a significant role in newborn care and to provide the necessary evidence-based nursing applications in CPAP practice, which is being used increasing on a regional and international basis. The effectiveness of the teaching method, which can be used to meet this need, was examined in this research. The questions here can be used in both regional and international studies and in nurse training, if updated according to the literature.

Limitations of the Study

One of the limitations of this study was that all the nurses working in the study area related to the subject could not be reached. There are 49 nurses working at neonatal departments. A total of 74.3% (36/49) were able to participate in the study. Some of the nurses could not take part, because they were on duty at the time the study was conducted. To compensate for this drawback, a new workshop program was planned for the nurses who could not participate initially.

These kinds of educational studies conducted with small groups are an effective way to make up for a lack of information and to correct false beliefs. The methods applied and the information obtained could help future researchers set a base and establish more sample groups. It is possible to improve the quality and safety of newborn care by having nurses acquire sufficient knowledge and skills. The method used in this study proved to be efficient, since it helped to increase the knowledge of the nurses who took part. The nurses in our study were assessed only as to the extent of their knowledge. It is suggested that other studies be conducted to evaluate their skills on the subject in question.

We wish to thank our esteemed specialists and nurses who participated and supported us by evaluating the multiple choice questions used in the study.

5. Morley C. Which neonatal nasal CPAP device should we use in babies with transient tachypnea of the newborn? Journal de Pediatria 2011; 87:466-467.

13. Koyamaibole L, Kado J, Qovu JD et al. An evaluation of bubble-CPAP in a neonatal unit in a developing country: Effective respiratory support that can be applied by nurses. Journal of Tropical Pediatrics 2006;52:249-253.

16. Altun I, Zencirci AD. Management of fever and hyperthermia: Impact of lecture based interactive workshops on training of nurses. Libyan Journal of Medicine 2010;5:5140.

17. Altun I, Zencirci AD. Knowledge and management of pressure ulcers: Impact of lecture-based interactive workshops on training of nurses. Advances in skin & wound care, Journal for Prevention and Healing 2011;24:262-266.